Agri-Expo has, since 2005, been the programme leader for a training initiative by the Western Cape Department of Agriculture to send students to France for cheesemaking knowledge as part of a highly successful cooperative agreement between the Burgundy and Western Cape governments.

To date, 38 junior cheesemakers, mostly from previously disadvantaged groups, have had the opportunity to visit Burgundy for this practical course which includes modules on marketing and other industry-related issues. Numerous individuals who benefited from this programme have since excelled in the industry by developing new cheese, improving existing cheese as well as upgrading production methods and plant layouts.

In 2013, no less than six young South African cheese makers benefited from the century-old cheesemaking know-how of the French after being awarded scholarships during the DuPont Qualité Award Ceremony on 24 April at GrandWest. These cheesemakers spend three weeks in Burgundy, France to gain firsthand experience from various experts as part of a co-operation agreement between the Governments of the Western Cape and Burgundy. 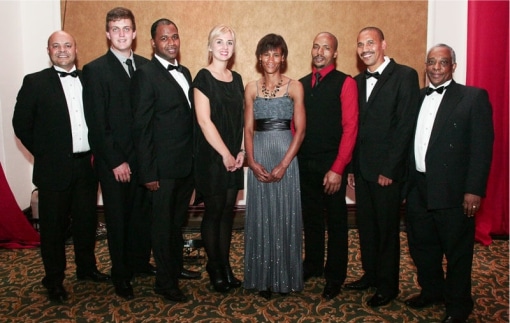 Mr Marius Paulse, Director of the Programme for Structured Agricultural Education and Training at the Western Cape Department of Agriculture (on the right) that funds the scholarships, says that this exchange programme is one of the Department’s flagship initiatives: “We are significantly contributing to the local dairy and cheese industries and the Department is proud of the success of this project.” 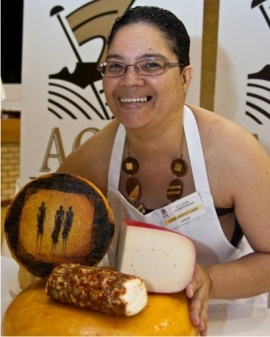 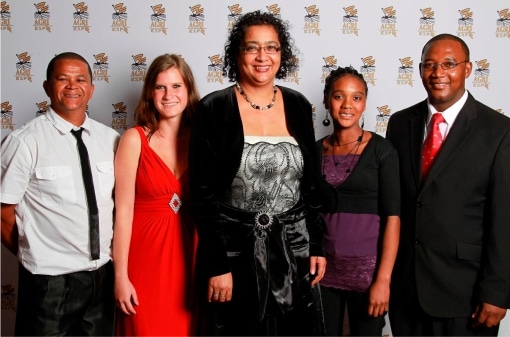 The four cheesemakers selected for the 2012 cheese-making scholarship to Burgundy, were announced on 25 April during the DuPont Qualité Awards Dinner.

One of the new yoghurt judges at the 2012 judging of the SA Dairy Championships was Adri Swartland, one of the four fellowship students that went to France in 2006. At the time she was a student cheesemaker at Parmalat Simonsberg and today she is the Quality Manager at Fair Cape, a well-known yoghurt manufacturer in the Western Cape.

The four cheesemakers selected for the 2011 cheese-making scholarship to Burgundy, were announced on 27 April during the Danisco Qualité Awards Dinner.

They are at the back f.l.t.r: David Jackson (Simonsberg Cheese), Kobus Mulder (Agri-Expo Dairy Manager) and Jonathan Hendricks (Kasselshoop Cheese), and in the front f.l.t.r: Lezl Pietersen (Arista Dairies) and Andries Hendricks (All Seasons Dairy).

The Fellowship remains highly successful as can be seen from the improvement in the cheese made by past students. One of the decision-makers who made his curtsy as a judge at the 2011 SA Dairy Championship judging, is Vernon Manuel, the first student of the Burgundy Cheesemaking Fellowship in 2005. 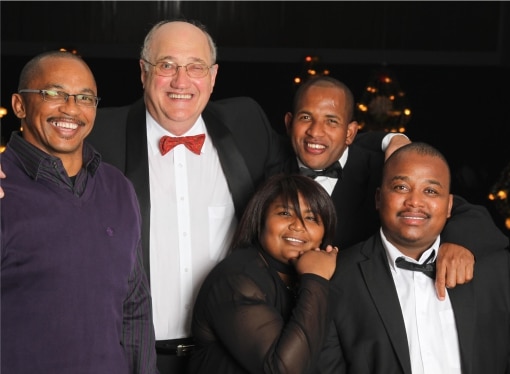 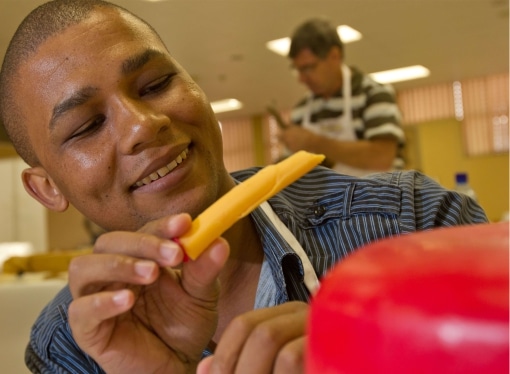 Manuel, born in Worcester, completed his studies as a food technologist and then joined a well-known goat’s milk cheesery in Paarl as a quality manager. On his return from Burgundy, he introduced remarkable quality improvements at the cheesery and also developed a new cheese. He is presently employed as a dairy technologist by a well known retail group known for their quality products, where he is responsible for the group’s cheese quality. 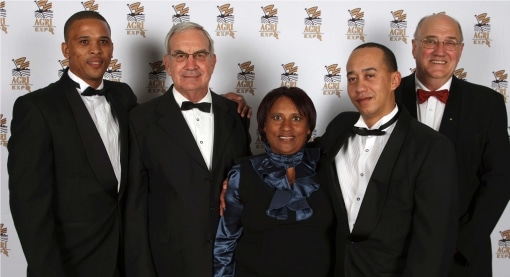 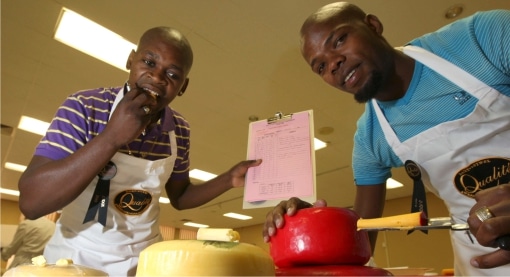 The Minister of Agriculture in the Western Cape, Gerrit van Rensburg, attended the Danisco Qualité Dinner when the students for the 2010 Burgundy Cheesemaking Fellowship were announced. They were: F.l.t.r.: Leonard Majampa of the Rhodes Food Group with Minister Gerrit van Rensburg; Nellie Fisher, Clarance Job of Ladismith Cheese; and Kobus Mulder (Agri-Expo). Not present: Doreen Blom of Alfalfa Dairy, Worcester.

Two past students of the Fellowship, Mahlomola Moso and Bongi Nondzaba, were invited as trainee judges to the 2010 SA Dairy Championship judging and their participation was well covered by the media.

Sixteen Western Cape cheese makers have now been trained through this programme. which was initiated by Agri-Expo in 2005 and since sponsored by the Department of Agriculture: Western Cape. Their vision to support cheese making in the province has strategic value, as more than 50% of all South African cheese is now manufactured in the Western Cape. 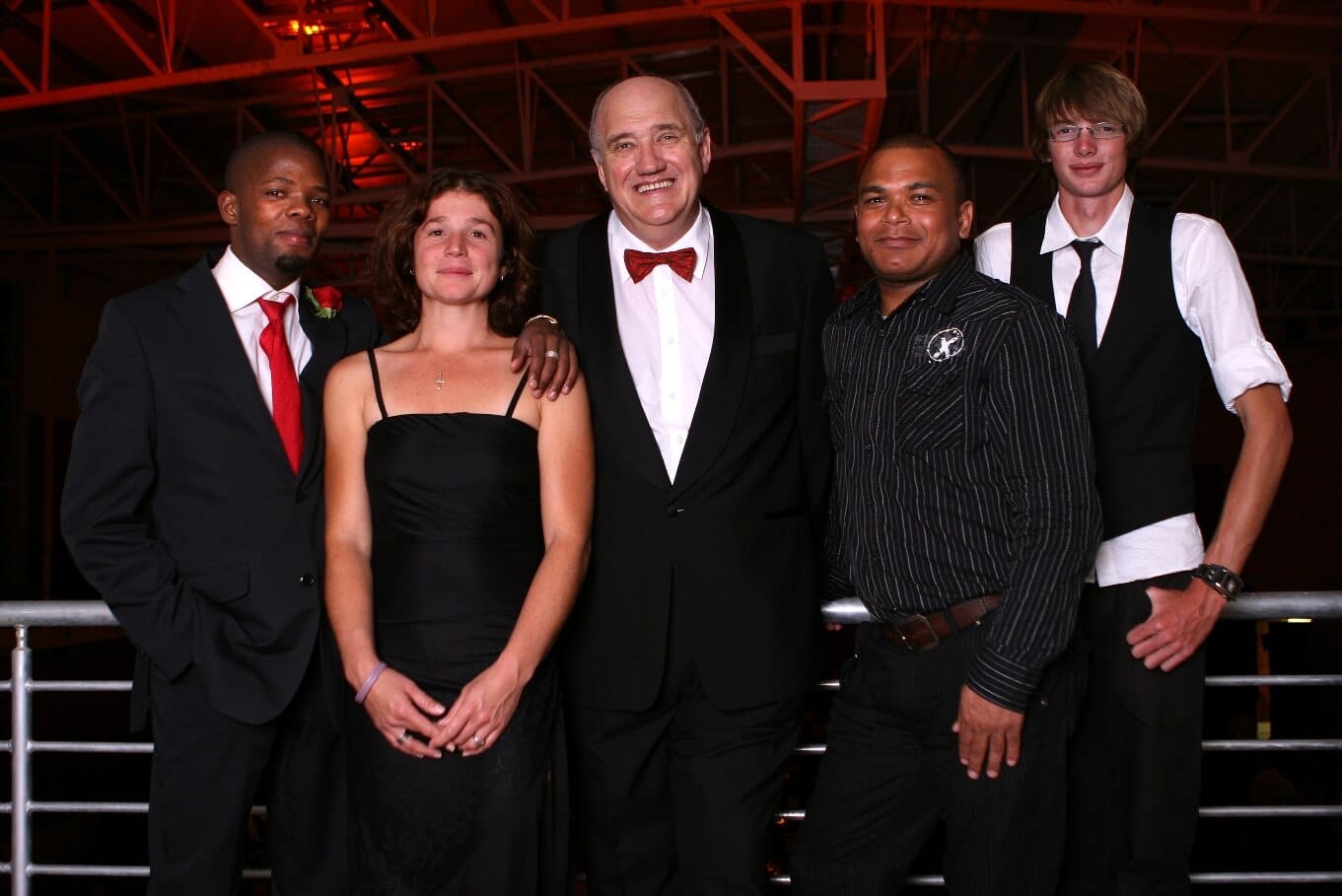 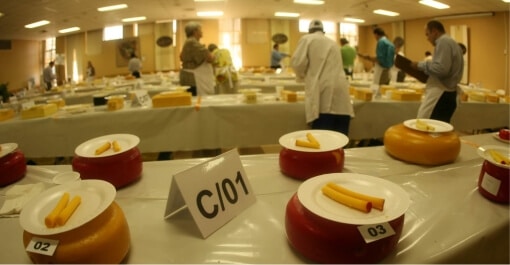 In 2008 Danisco came on board as naming rights sponsor of the Qualité Dinner and when the four students’ names were announced for the Western Cape Burgundy Cheese making Fellowship, Danisco handed each a traveling bag for their trip to France.

This year’s students were announced at the Lake Foods Qualité Dinner and spent the period 9 – 30 June 2007 in Macon-Davayé studying the finer art of cheese making.

Mahlomola Moso from Tulbach, Estalanie Marais from De Doorns, and Mario Jumat from Stellenbosch appear on the photo with Minister Cobus Dowry and Jean-Luc Bodin. Absent is Stefan Pockpas, the fourth Fellowship winner. 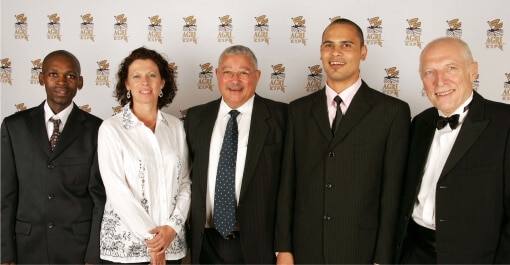 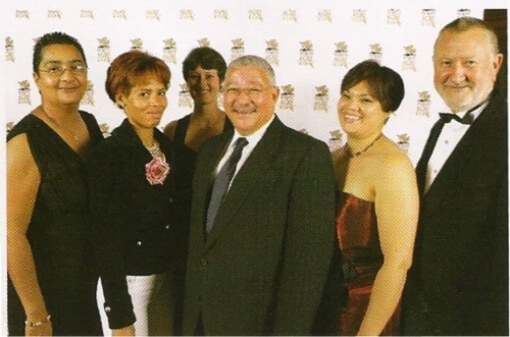 In its second year, the four lucky candidates for the French Cheese Making Fellowship were all women, especially appropriate since it coincided with the Premier’s Year of the Woman programme.

Last year’s students performed very well – three new cheeses have already been launched and several improvements were made to their cheeseries. Minister Cobus Dowry visited the four women students this year in France to reassure himself as to the training they receive.

Mr Kobus Mulder, Manager: Dairy of Agri-Expo was instrumental and acted as project manager to send the first four Western Cape cheesemakers from previously disadvantaged groups to Burgundy to study French cheesemaking. These four fortunate students were Tobias Mutota (La Montanara), Elliot Bunu (Trumilk Cheese), with Kobus Mulder, Minister Cobus Dowry (Provincial Minister of Agriculture, Western Cape), Johan Ehlers (Agri-Expo General Manager), Jacko van Beulen (Klein River Cheese) and Vernon Manual (Fairview Cheese). This is one of the most exciting projects Agri-Expo has been involved with and as it is a three-year project, we will see an enormous quantity of new cheese making knowledge brought into the Western Cape. 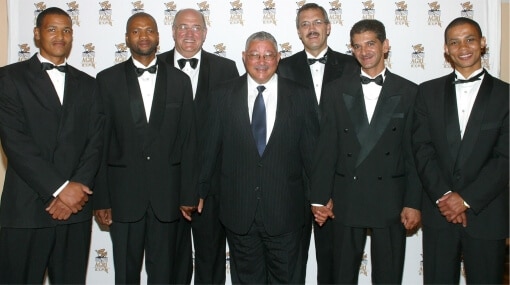